A PLACE FOR PLUTO has made the nominee list for the Maryland Association of School Librarians Black Eyed Susan Award for the 2019-2020 school year! What does this mean? It means that during the upcoming school year, students vote from the nominees on their favorite of the bunch, from picture books through young adult. Awards are given in May 2020.

I’m so excited to be a part of this and blown away at the list of names. It is surreal to see my name on a list of such amazing authors. And I’d like to send a special shout-out to Melanie Demmer, illustrator of A PLACE FOR PLUTO. It would never have made this list without you!

Below is a list of the picture book nominees. To see a full list of the nominees, click here.  If you haven’t checked out any or all of the books on this list, please run to the library or book store and do so!

I continue to be awed and humbled by the outpouring of love for this first book of mine. And…I’m excited to announce that I am the honorable mention recipient for the Council For Wisconsin Writers Tofte/Wright Children’s Literary Award for the writing of A PLACE FOR PLUTO. This award is given to Wisconsin residents for literary works for children published in 2018. I’m honored to be in great company with author Patricia Sutton for her work on CAPSIZED.

A full list of winners from other categories can be found here.

Below is some information and history on the award from the Council for Wisconsin Writers website:

The Arthur Tofte/Betty Ren Wright Children’s Literature Award is given to the Best Children’s Book published by a Wisconsin-based writer in the previous year. From 1966 to 1992 this award was known as the Juvenile Book Award, and from 1997-2003 as the Arthur Tofte Juvenile Fiction Book Award. See a list of past winners of this award.

Arthur Tofte (1902-1980) enjoyed two distinctly different careers: one as a businessman and the other as an author of science fiction, fantasy, and the occult. He published his first story, “The Meteor Monsters,” for Amazing magazine in 1938 when he was a member of the Milwaukee Fictioneers, a group focused on the memory and style of influential science fiction writer Stanley G. Weinbaum. Tofte then focused on his career as a business executive in Milwaukee. Upon his retirement in 1969, and with the encouragement of editor Roger Elwood, he began publishing again, eventually producing five novels, 18 short stories, and four essays. His most popular works include Crash Landing on Iduna (1975), Walls Within Walls (1975), and The Ghost Hunters. His The Day the Earth Stood Still (1976) is a full-length version of the short story made into the world-famous film.

Betty Ren Wright (1927- 2013) grew up in Milwaukee, graduated from Milwaukee-Downer College (now Lawrence University), and worked as an editor for Western Publishing Co. in Racine from 1949 to 1978 until turning to writing full time. Known for her mastery of mystery and suspense, her popular mysteries for middle-grade readers include A Ghost in the House, The Ghost of Mercy Manor, Too Many Secrets, and A Ghost Comes Calling. Her novel The Dollhouse Murders was a 1983 Edgar Award nominee in the best juvenile category and won the Texas Blue Bonnet Award. She also wrote 35 picture books, and her short stories appeared in Young Miss, Ladies’ Home Journal, Redbook, and many other magazines.

Pluto belongs on another out-of-this-world list! The Library and Information Technology Association (LITA), a division of the American Library Association (ALA), recently announced the 2019 Excellence in Children’s and Young Adult Science Fiction Notable Lists.

I’m happy to announce that A PLACE FOR PLUTO has been recognized as a 2019 Golden Duck Notable Picture Book! Below is a list of all the books, from picture book through young adult. To read the full article, please click here.

If You Had a Jetpack by Lisl H. Detlefsen. Illustrated by Linzie Hunter. Knopf.

A Place for Pluto by Stef Wade. Illustrated by Melanie Demmer. Capstone Editions.

Margot and Mateo Save the World by Darcy Miller. HarperCollins.

Too Much Space! (Beep and Bob) by Jonathan Roth. Simon and Schuster BYR.

Voyage of the Dogs by Greg Van Eekhout. HarperCollins.

A Conspiracy of Stars by Olivia A. Cole. Katherine Tegen/HarperCollins.

The Future Will Be B.S.-Free by Will Mcintosh. Delacorte.

The Spaceship Next Door by Gene Doucette. Houghton Mifflin Harcourt.

A Spark of White Fire by Sangu Mandanna. Sky Pony.

Your One & Only by Adrianne Finlay. Houghton Mifflin Harcourt.

Exciting things have been happening in Pluto’s universe this last week (and we all know he could use a little good news).

A PLACE FOR PLUTO has been chosen by Barnes & Noble as part of their National Storytime for August 11, 2018! What exactly does that mean? Every Barnes & Noble across the country holds a Saturday morning storytime each week with the same book at each store. And they’ve chosen A PLACE FOR PLUTO as one of those books! There will be a reading, worksheets and lots of Pluto love! So mark your calendars for August 11!

I couldn’t be more excited. I literally threw confetti.

And due to this development, the release date for A PLACE FOR PLUTO is now July 1, 2018! You can pre-order from Barnes & Noble, Indie Bound, Amazon, Capstone and more.

Just a little over a month and PLUTO will be out on the shelves!

Every step of this process makes my dream feel like a reality. Today, it’s the link…to buy my book…at Barnes & Noble! A PLACE FOR PLUTO comes out August 1, but you can order your copy now! Or two. Just kidding. (Not really kidding, they make great gifts.)

So without further ado, here is the link: A PLACE FOR PLUTO pre-order 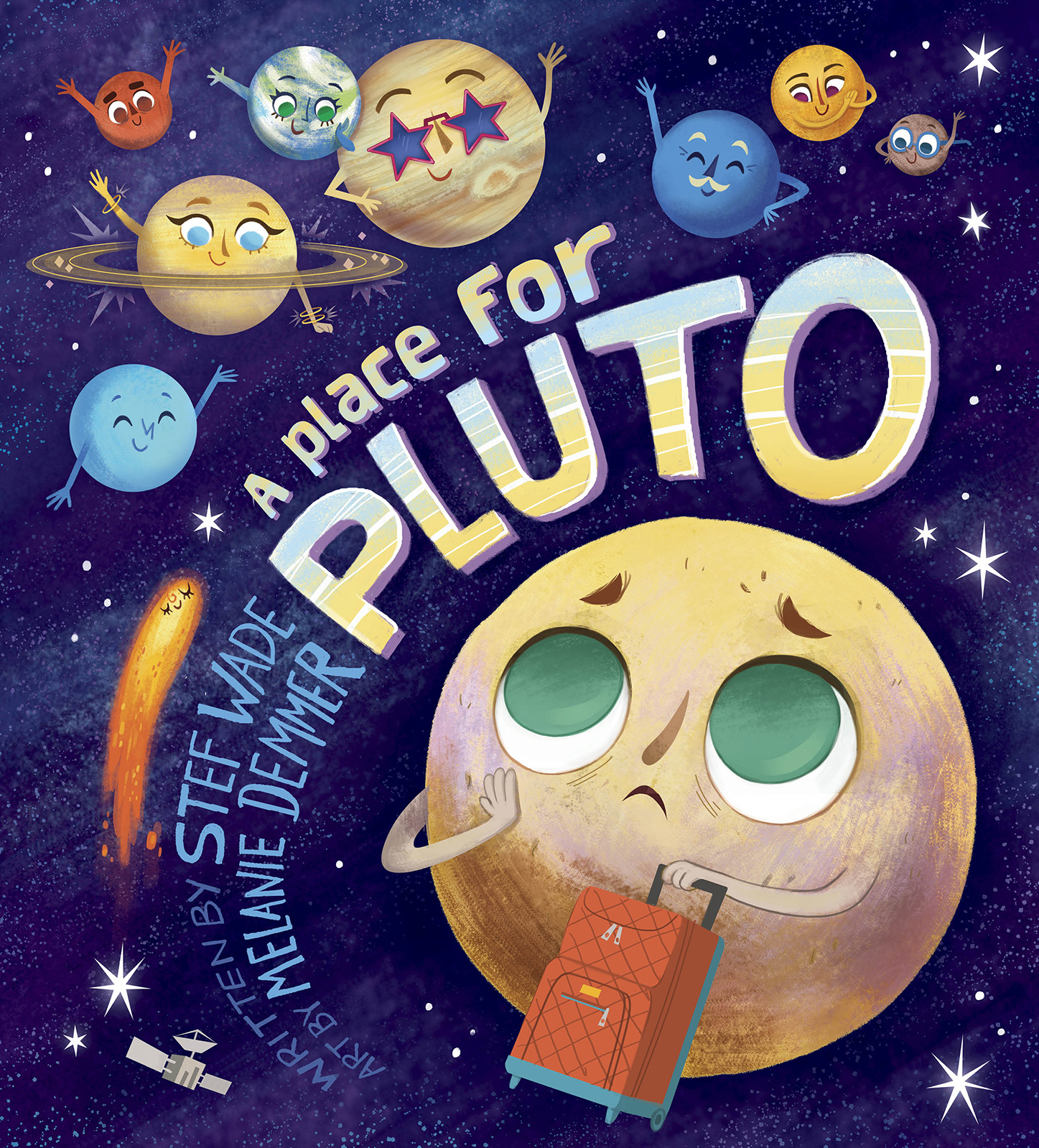 Writing has been my “thing” since I was able to form words on a paper. Being an author has been my dream since I started reading. Eight years ago, I decided to get serious about it.

I’m proud and excited to announce that my first children’s book is becoming a reality. A PLACE FOR PLUTO will hit shelves Summer 2018.

A PLACE FOR PLUTO follows Pluto as he struggles with a bit of an identity crisis after being told he’s no longer a planet. The book is illustrated by Melanie Demmer and published by Capstone.

I’ll share more about my journey along the way, but for now, we’re popping the cork and toasting to Pluto. Here’s to chasing dreams that may seem out of this world.