I’m so excited to share the cover to my next book, a fun companion to A PLACE FOR PLUTO…MOVING TO MARS! 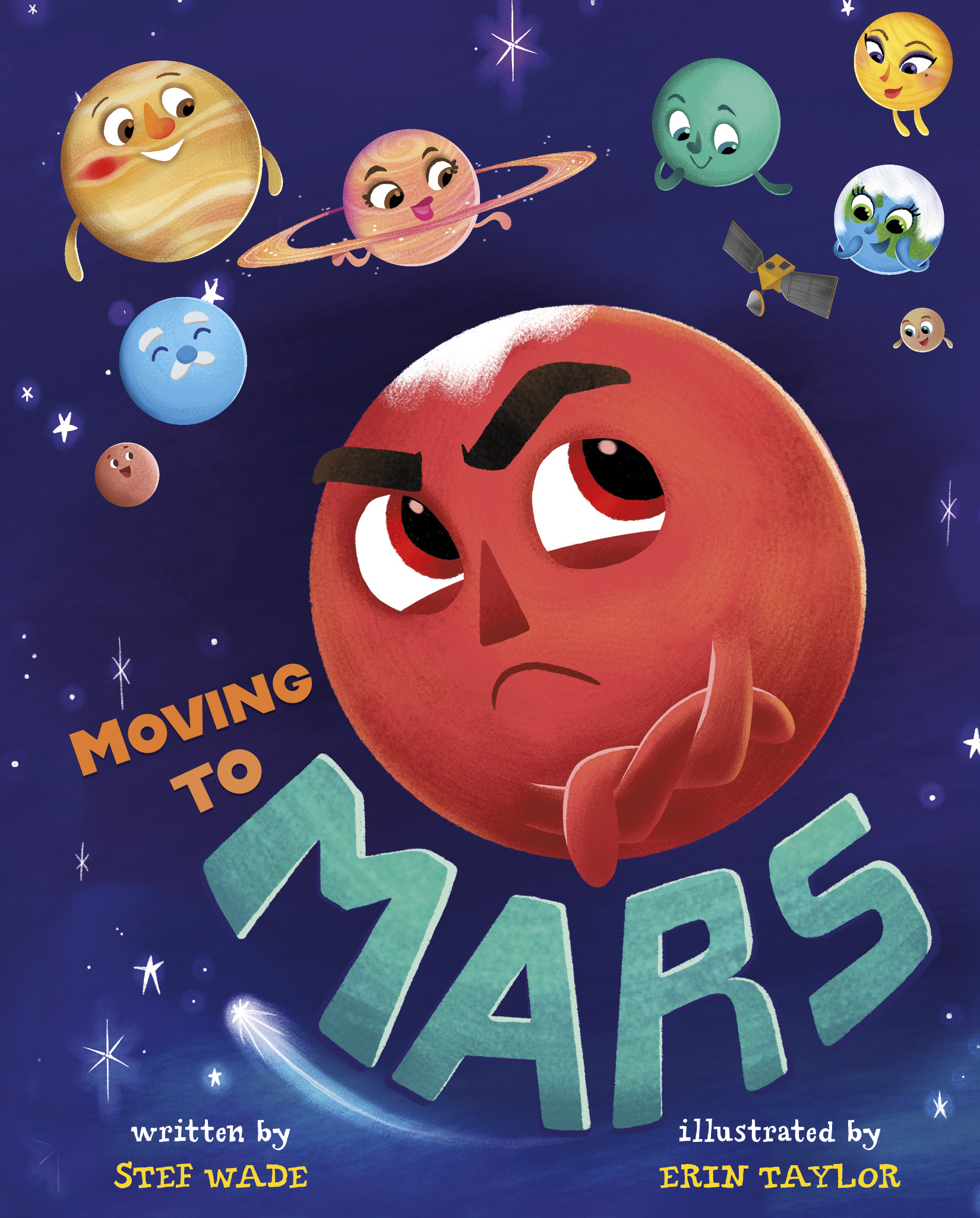 Mars likes peace and quiet and is not happy when unexpected visitors start showing up. But when they leave, Mars realizes being alone isn’t all that great.

Maybe MARS is a people planet after all!

As a follow-up to A Place for Pluto, Moving to Mars by Stef Wade, illustrated by Erin Taylor, brings the same mix of humor, science, and friendship to the audience — creating another out-of-this-world reading experience!

Stay tuned, space fans! This book will be out of this world!

I’m over the moon to announce my FIFTH picture book (a whole hand! I know!), MOVING TO MARS, written by me, Stef Wade, and illustrated by Erin Taylor. MOVING TO MARS is published by Capstone and releases in August 2022.

A perfect companion to A PLACE FOR PLUTO, MOVING TO MARS details our favorite red planet who’s not so happy when unexpected visitors show up. But as they leave, Mars realizes being alone isn’t as great as he thought it was. What can he do to make himself a people planet?

Packed with lots of space facts, puns and some old familiar characters, this book is a great addition to any space unit or STEM curriculum. 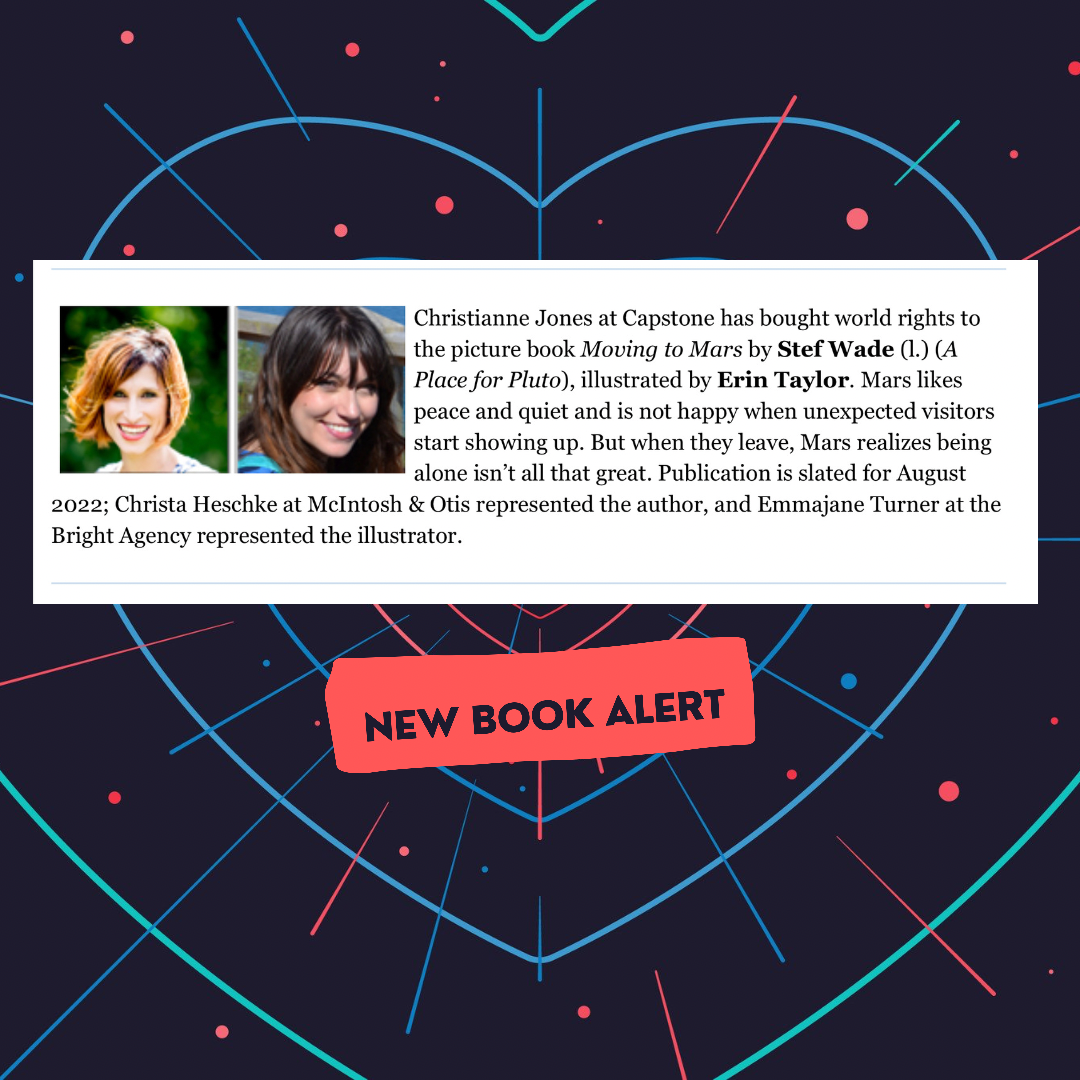 Stay tuned, space fans! Can’t wait to share another out of this world story with you!

I’m QUite excited to announce that Q & U CALL IT QUITS is available now!

For fans of Z Is for Moose and Little i, this hilarious and quirky story about friendship and the alphabet will make young readers excited about letter learning.

What happens when best friends Q and U quarrel? It’s a real quandary, since they have always been quality friends—a true squad.

But sometimes, U wants some time to herself—even though Q is lonely because he doesn’t always fit in with the other letters without her. When the rest of the alphabet notices the split, they decide they want to do the same. And utter chaos ensues!

Can Q and U come together to quell the mayhem and help the letters repair their friendships?

“This humorous and punny alphabet book highlighting letter blends features colorful and vibrant digitally rendered illustrations. Letter blends within the text are appropriately highlighted in red, making it easy to share examples with young readers. Wade’s quirky story pairs well with the personified letters in Anne Marie Houppert’s What About X? An Alphabet Adventure.
VERDICT An entertaining recommendation for preschool and early elementary school teachers on a quest for alphabet-themed picture books about letter blending.”
To read the whole review, click here. 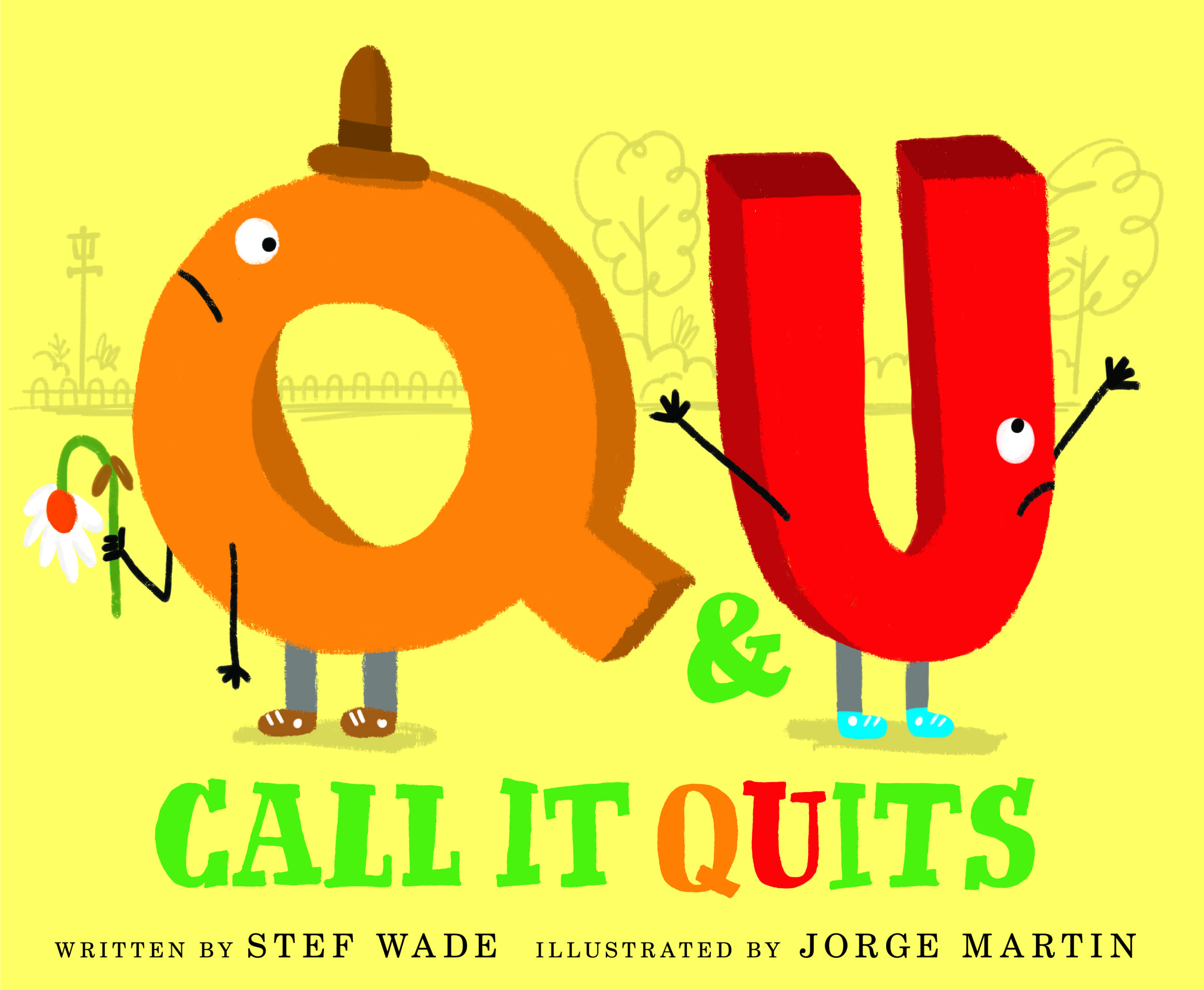 Q & U CALL IT QUITS is available everywhere books are sold!

I’m QUite excited to share the cover of my next picture book, Q & U CALL IT QUITS, illustrated by Jorge Martin. This story will be my third picture book and is published by HarperCollins, available June 15, 2021.

Q AND U CALL IT QUITS is a story of two good friends, Q&U. When U gets sick of Q being needy, she sets off for some alone time. When the other letter blends catch wind of the split, they begin to drift apart, creating chaos and confusion. How can the words be spelled without the letter blends?

I’m in love with these two QUirky letters and all the shenanigans they get in to. I’m so excited for you to meet them in June, but for now, feast your eyes on this adorable cover! Jorge’s talents know no bounds. Each page of this book is filled with such detail and whimsy, I can’t stop staring.

The book is available for pre-order through IndieBound and Amazon.

I’m so excited to share the news that A PLACE FOR PLUTO is a 2021 Grand Canyon Reader Award nominee! Sponsored by the Arizona Library Association, the Grand Canyon Reader Award is a reader award program for students in Arizona. Students vote annually on their favorite book in the following categories: Picture, Non-Fiction, Intermediate, Tween and Teen. The nominees are read by teachers, librarians and students with approximately 45,000 Arizona students vote each year.

I’m honored to be among these incredible authors and illustrators and can’t wait for A PLACE FOR PLUTO to be shared with so many students in the great state of Arizona!

Here is the list of 2021 Grand Canyon Reader Award nominees in the picture book category. 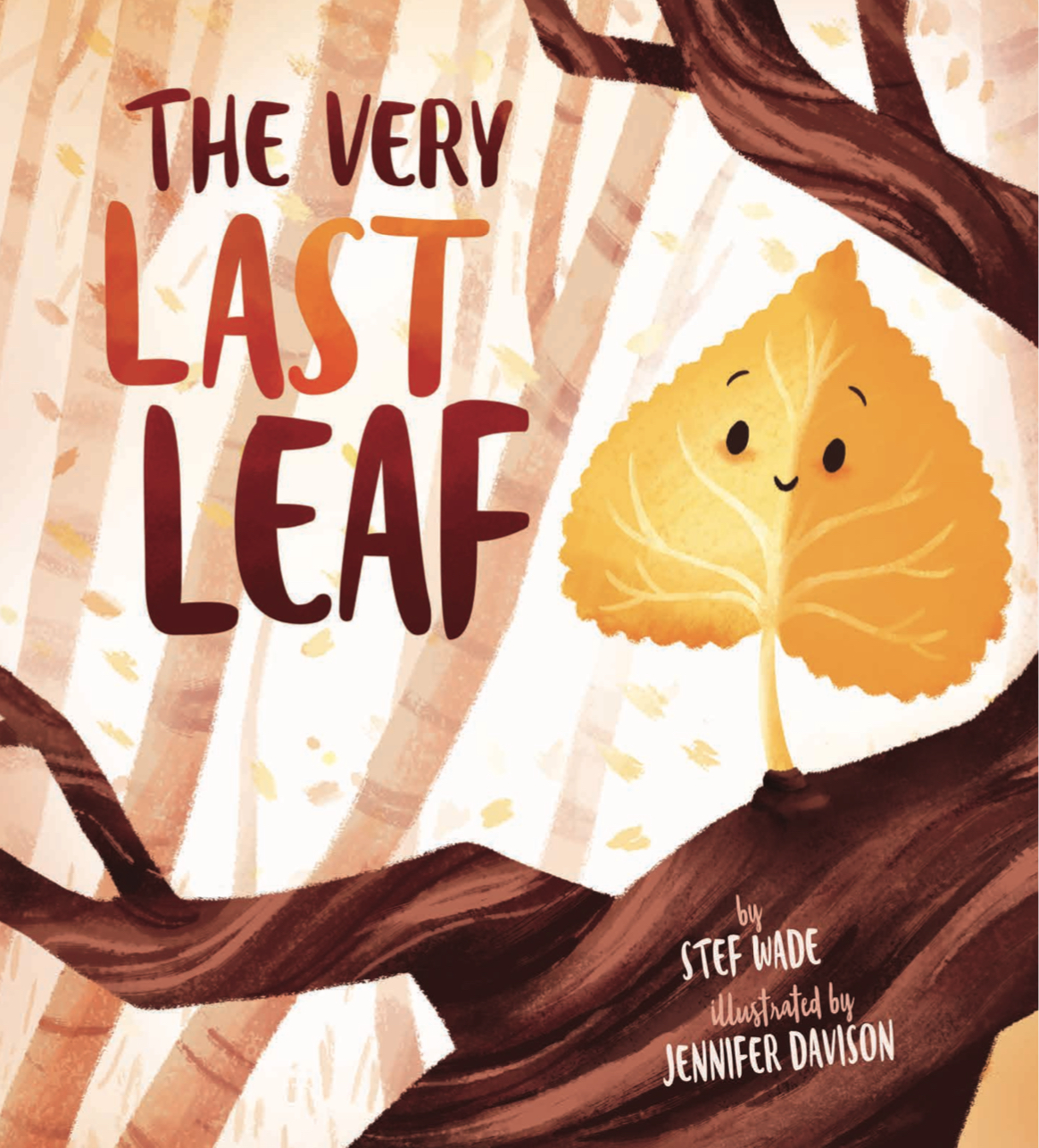 What’s THE VERY LAST LEAF about?

Lance Cottonwood is the best and brightest of the leaves, but even the top students on the tree have worries. Can Lance conquer his fear of falling and just let go when the time comes for his final exam, or will he let his worries take over? In this funny and encouraging picture book, best-selling author Stef Wade (A Place for Pluto) tells an engaging story and deftly addresses social and emotional struggles many kids encounter each day…feeling anxious, wanting to be perfect, facing fears, etc. These themes combined with illustrator Jennifer Davison’s delightful characters and rich autumnal colors make The Very Last Leaf a perfect book for the start of a new school year, the arrival of autumn, or any period of transition in life.

I don’t know what the beginning of the 2020-2021 school year is going to look like, but I expect there to be higher levels of anxiety than normal – both from students and from parents. This book helps children through the process of identifying fears and working through them and, I believe, will be a great addition to any school or home library!

To pre-order THE VERY LAST LEAF, visit any of the following links:

In these changing times, I am unsure of what my book launch will look like. Whether virtual or in-person, I will be sharing that information with you in the upcoming months. I hope to see all of you there when I share Lance with the world for the first time.

Thanks to everyone for your continued support.

While we spend some time at home, I wanted to put together a place to add activities that supplement A PLACE FOR PLUTO! Check out these links for extra fun at home. I will continue to add to this list. If you have a Pluto activity you’ve used, please feel free to email me the link/materials at [email protected]

I’m QUivering with excitement to finally announce to you my third picture book! Q AND U CALL IT QUITS is set to release Summer 2021, published by HarperCollins, with Jorge Martin illustrating. I’m beyond thrilled to be working with Karen Chaplin at HarperCollins and to see my words come to life through the magic of Jorge Martin.

Q AND U CALL IT QUITS is a story of two good friends, Q&U. When U gets sick of Q being needy, she sets off for some alone time. When the other letter blends catch wind of the split, they begin to drift apart, creating chaos and confusion. How can the words be spelled without the letter blends?

This story has no lack of puns and silly humor, but also helps teach children about letter blend sounds through the theme of teamwork.

I’m so excited to be working with Jorge Martin. He has illustrated a family favorite of ours, LITTLE TACO TRUCK, along with FAIRY TALE PETS, and various other children’s titles. His illustrations are whimsical and colorful and I know he is going to knock it out of the park with our friends Q and U. You can check out his work here. 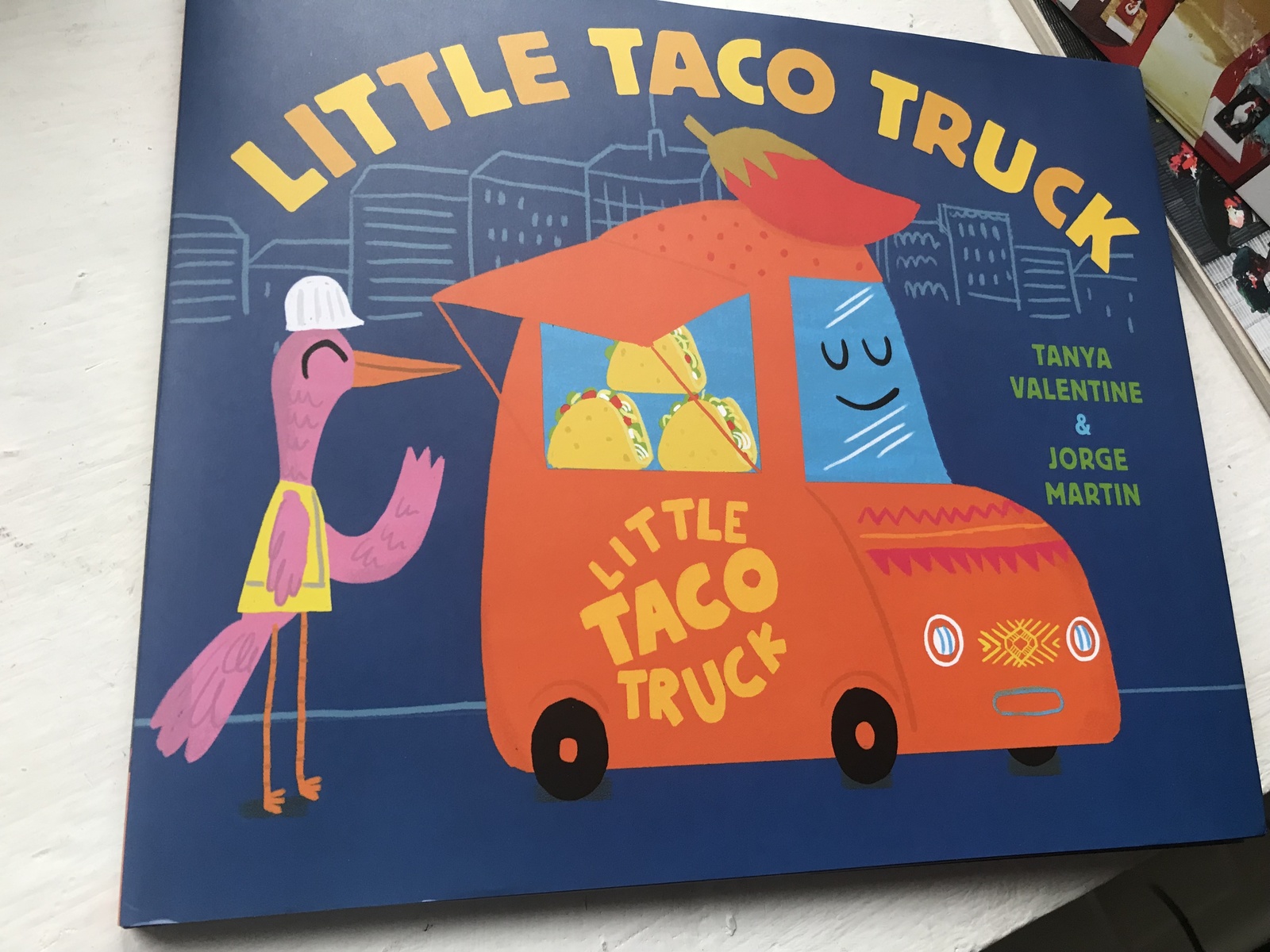 I’ll have more information in the future. Thanks for coming along on this ride with me. I feel blessed to continue on this exciting path doing what I love the most!

A PLACE FOR PLUTO has made the nominee list for the Maryland Association of School Librarians Black Eyed Susan Award for the 2019-2020 school year! What does this mean? It means that during the upcoming school year, students vote from the nominees on their favorite of the bunch, from picture books through young adult. Awards are given in May 2020.

I’m so excited to be a part of this and blown away at the list of names. It is surreal to see my name on a list of such amazing authors. And I’d like to send a special shout-out to Melanie Demmer, illustrator of A PLACE FOR PLUTO. It would never have made this list without you!

Below is a list of the picture book nominees. To see a full list of the nominees, click here.  If you haven’t checked out any or all of the books on this list, please run to the library or book store and do so!

I continue to be awed and humbled by the outpouring of love for this first book of mine. And…I’m excited to announce that I am the honorable mention recipient for the Council For Wisconsin Writers Tofte/Wright Children’s Literary Award for the writing of A PLACE FOR PLUTO. This award is given to Wisconsin residents for literary works for children published in 2018. I’m honored to be in great company with author Patricia Sutton for her work on CAPSIZED.

A full list of winners from other categories can be found here.

Below is some information and history on the award from the Council for Wisconsin Writers website:

The Arthur Tofte/Betty Ren Wright Children’s Literature Award is given to the Best Children’s Book published by a Wisconsin-based writer in the previous year. From 1966 to 1992 this award was known as the Juvenile Book Award, and from 1997-2003 as the Arthur Tofte Juvenile Fiction Book Award. See a list of past winners of this award.

Arthur Tofte (1902-1980) enjoyed two distinctly different careers: one as a businessman and the other as an author of science fiction, fantasy, and the occult. He published his first story, “The Meteor Monsters,” for Amazing magazine in 1938 when he was a member of the Milwaukee Fictioneers, a group focused on the memory and style of influential science fiction writer Stanley G. Weinbaum. Tofte then focused on his career as a business executive in Milwaukee. Upon his retirement in 1969, and with the encouragement of editor Roger Elwood, he began publishing again, eventually producing five novels, 18 short stories, and four essays. His most popular works include Crash Landing on Iduna (1975), Walls Within Walls (1975), and The Ghost Hunters. His The Day the Earth Stood Still (1976) is a full-length version of the short story made into the world-famous film.

Betty Ren Wright (1927- 2013) grew up in Milwaukee, graduated from Milwaukee-Downer College (now Lawrence University), and worked as an editor for Western Publishing Co. in Racine from 1949 to 1978 until turning to writing full time. Known for her mastery of mystery and suspense, her popular mysteries for middle-grade readers include A Ghost in the House, The Ghost of Mercy Manor, Too Many Secrets, and A Ghost Comes Calling. Her novel The Dollhouse Murders was a 1983 Edgar Award nominee in the best juvenile category and won the Texas Blue Bonnet Award. She also wrote 35 picture books, and her short stories appeared in Young Miss, Ladies’ Home Journal, Redbook, and many other magazines.