“All the writers I know got their agents through face-to-face agent pitch sessions.”
“Agents only get writers from queries.”
“Queries hardly get read.”
“You’ll never get an agent unless you know someone.”

I heard all of these things while looking for an agent. And friends, when contradictions as strongly as these cloud your mind with confusion and fear, it is of utmost importance to open up your mind and let them out.

I never cut off an avenue that could lead to an agent and in the end, it became a combination of everything that got me to where I am today. (Team Christa/McIntosh & Otis!)

I come from an advertising/marketing/public relations background. As a business writer, I’ve tackled everything from cardboard boxes, to Brazilian Buttlifts, to soccer moms. (Triple points for making a creative connection between all three of these. There are writing prompts everywhere people).

In writing for business, I learned to tone my once flowery and poetic way of writing into a short, succinct verbiage for whatever the room on the page allowed.

So when the Twitter Pitch contest #PitMad came across my radar years ago, I thought, here’s my chance! Knock 65,000 words down to 140 characters? Easy Peasy Havarti Cheesy.

If you’re not familiar with #PitMad, #Pitchmadness #PBPitch #Pitchwars #pitch2pub or the many others not listed here, they are Twitter parties where you have the opportunity to pitch your book to agents and editors with one tweet. Agents and editors peruse the hashtag and favorite pitches that they want to see. It’s a great way to get your manuscript into an agent’s hands and more so, get them excited about your work! It’s a little leg up from a straight query because they will be awaiting your manuscript.

Knocking your book down to 140 characters, whether it be a 400-word picture book or a 300,000- word epic fantasy…okay…maybe it seems a little daunting. But here are a few pointers to help you out. A few tips and tricks I’ve learned along the way both from writing headlines, taglines and bikini lines (I almost wish I was kidding) to sell your ideas. 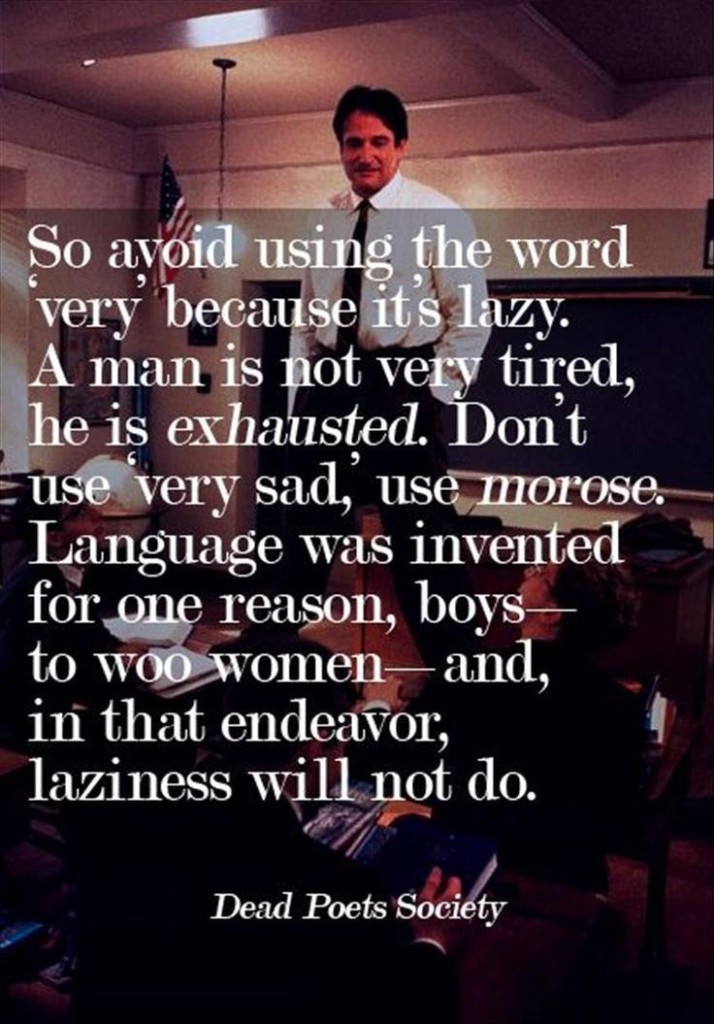 In Dead Poet’s Society, the late great Robin Williams once said, “So avoid using the word ‘very’ because it’s lazy. A man is not very tired, he is exhausted. Don’t use very sad, use morose. Language was invented for one reason, boys – to woo women – and, in that endeavor, laziness will not do. It also won’t do in your essays.”

You likely already understand this concept, you’re a writer after all, so don’t drop your principles for social media! Avoid any and all generalizations about your story. There is NO ROOM for that. You have 140 characters to get that agent or editor’s attention, so writing something like “When two worlds collide, big odds are at stake and only one can win” tells us NOTHING!

What makes your book unique? Tell us that. Is it a three-headed alien who steals the pain of people it touches? Is it a walking, talking glue stick paralyzed by a fear of drying out?

And most importantly, what’s at stake? Will Valentine’s Day fail to exist if the glue stick dries up? (hey, maybe I should start writing this one) Will the human race forget how to love if they don’t know pain?

It can be written as a question, or a statement, whatever makes it easiest to get these points across.

We know, you’re a writer and you can craft the cutest sentence in the Twitterverse, but cute doesn’t always convey your story. Over the years, I thought I’d created some of the funniest Twitter pitches known to man but guess what? They got no traction. The ones that did were the ones that gave the unique plot and stakes all wrapped up into a pretty (but not cute) tweet.

Just because I told you not to be cute, doesn’t mean your Tweet shouldn’t show your voice. You’ve spent a lot of time crafting that voice for your manuscript, don’t lose it now! Read over some of your favorite parts of your manuscript (we all have them). Why do you love them so much? More than likely, it’s your voice. Maybe it’s the anxiety-ridden ramblings of the glue stick that make you feel actual panic. Or the eerie and stark air to the three-headed alien that has you ready to be taken to its leader.

Now look back at your Twitter pitch. Do you feel the same feels? You should.

You may gasp at the idea that I just called your very clever character’s name useless, but it is. Well, most likely. No one is doubting that you have great names, creative settings, brilliant secondary characters but unless they’re absolutely pertinent to getting the point of your story across, they are useless for this purpose. They’ll bog down your pitch. We don’t need to know that the glue stick’s name is Elmer. Cute, but it doesn’t matter because it takes up coveted space.

I’m all about the research. Go back on the old hashtags for some of these contests. Find the ones that got the most love. Figure out why. Sure, sometimes another writer may have the most sellable idea of all time, but more often than not, they got attention from agents because their pitch was clear, showed off their voice and offered up originality and high stakes.

When Glue Stick loses his cap, a fear of drying up sends him on a frantic search to save himself and Valentine’s Day.  (insert hashtags)

This may not be perfect, but it follows the formula. I suggest making an entire page of these. They may seem very similar but it’s the best way to hone the perfect pitch. Read them out loud. Read them to a friend. DO NOT wait until the morning of the pitch party to write them.

There are different rules for each pitch party. Get familiar with the rules. Are you allowed one tweet? A certain amount per hour? Per day? Work with the rules and create your tweets based around them.

A bunch of pitch parties are right around the corner! Start crafting your pitches now. And may the favorites be ever in you favor.